Principles and goals of the German Doctors

The motivation for the founding of the German Doctors in 1983 (at the time called “Doctors for the Third World”) was to help people in countries located in the southern hemisphere who have no access to sufficient basic health-care services and are not able to claim their human right to the “highest achievable state of physical and mental health”. This right is one of the economic, social, and cultural human rights. It stipulates that all humans should have access to healthcare services when they get sick.

Doctors from Germany, Austria, and Switzerland have worked toward this goal with their nonpaid missions in the slums and impoverished rural areas under the supervision of this organization. They have provided basic medical care on site and, together with the local population and in close cooperation with local partner organizations, have worked toward improving the living conditions where they work. This self-imposed mandate as a deployment organization has its fundamental justi­fication even after about thirty-five years. There are still billions of people who have no (adequate) access to healthcare services.

Below you will find an over­view of our principles and goals.

The firm belief in the dignity of each individual person and the con­viction that every bit of help that we can give a person in need has its own value sustain our voluntary work. However, we also know that humanitarian help does not necessarily change the existing local misanthropic and poverty-causing structures.

In light of these convictions, each charitable mission by the doctors who treat people in the slums or other impoverished regions makes sense. Very early in the history of the organization the wish arose to also provide a sustain­able contr­ibution to the improve­ment of the patients’ living conditions over and above the direct help to each individual person. Health education for the patients and training of colleagues in our local partner organizations or the medical personnel on site therefore has always played an important role in our charitable work. The German Doctors‘ work rests on two pillars:

The first pillar comprises the unpaid, six-week missions the doctors from Germany, Austria, and Switzerland perform for people who have no (sufficient) access to health care. The enormous personal engagement of the 3,426 physicians who have performed 7,578 charitable missions (as of December 2019) shapes our self-image and forms the basis for the appreciation that we experience from our supporters and the general public. At the same time, we also consider it especially important that our doctors gain deep insight into the everyday reality of the poorest populations in the world. On their return, these doctors act as ambassadors of their patients and can contribute to the creation of political awareness for development aid in Germany, Austria, and Switzerland.

The second pillar comprises the development and realization of projects which contribute to the sustain­ability and strengthening of health­care systems and, thereby, to universal access to health care, as well as to an improvement of the living conditions of our target popu­lations. This work is based to a large extent on trust, which the individual doctors have built up through their medical work (Pillar 1) for the target populations. Central aspects are both training of the local health personnel, which is carried out by the German Doctors, and health education of the patients. We also work together with the local partners to establish structures which will no longer require external assistance in the long run. The realization of such measures, which are directly accompanied by our German Doctors, depends on the local needs and potentials and the involvement of local and international partners. The spectrum of measures in this pillar range from simple patient education about topics like hygiene and family planning to advice and support of our target populations so that they can better utilize the existing (e.g., state) services to perennial training of qualified healthcare personnel in the local healthcare system. We also support measures to generate income in different projects to reduce the dependence of our target populations. Support for our local partners in administrative and other, not directly medical, competencies are among our chosen tasks.

Our two-pillar model is complemented by the concept that the individual project phases “Help – Teach – Advise – Transfer” interlock. The charitable missions, which directly alleviate local misery, stand in the foreground (first pillar) of the phase ‘Help’.  This work enables us to build up relationships and trust with the patients and other stakeholders in our project areas. This has also enabled us, together with our partners, to contribute to strengthening the healthcare systems by developing measures in the following phases. We call all technical medical training ‘schools’ and our support of partners in building up non-medical competencies ‘advice’.  The latter also forms the basis for the transfer of projects into local hands to ensure sustainability. Of course, these three phases do not run separately or strictly successively, but are closely meshed and are generally carried out in parallel and over longer time periods so that we can speak of ‘building blocks’.

Our goal: Helping people to help themselves

It can be just as reasonable to begin with the schools and/or advice before applying the building block ‘help‘ and before sending out our volunteer German Doctors. This ensures that the project will have the right orientation toward long-term help to self-help and the inclusion in local structures from the very beginning.

Every time we plan a project, we consider the goal ‘transfer’. Strengthening partners and local structures to the extent that the healthcare of our target populations can also be ensured without outside help must constitute the incentive of our efforts. Naturally, the phases can overlap so that, for example, after no more volunteers arrive after transferring responsibility, the measures contained in the phases ‘school’ and ‘advice’ are continued as ongoing partner support.

Engagement in diverse kinds of projects

We refer to missions performed by volunteer doctors from Germany, Austria, and Switzerland, as doctor projects. These are always performed together with a local partner on site which bears the main responsibility for the project and employs the local colleagues (translators, nurses, local doctors, drivers, pharmacists, and laboratory technicians). German Doctors together with their partners arrange the personnel and financial volume of the doctors‘ missions and clarify expectations of the project activity. The concrete form of the doctor projects conforms to the local needs, whereby the German Doctors are active within the framework of the state healthcare system. For example, German Doctors can perform missions in the outpatient ‘shacks’ in the slums and in co-called ‘rolling clinics’ and serve in permanent healthcare facilities or even in district hospitals.

We generally carry out the doctor projects in combination with different projects within the local healthcare system and health-promotion activities. Our range of activities is also broad here and ranges from simple training directly within the doctor projects to complex educational programs for healthcare personnel and to ongoing medical measures, which are implemented with local partners and native personnel (like outpatient centers, clinics for tuberculosis, and HIV programs).  In terms of an expanded health concept, we also the support projects of local partner organizations in adjacent areas, like education, food security, and WASH (water, sanitation, and hygiene). 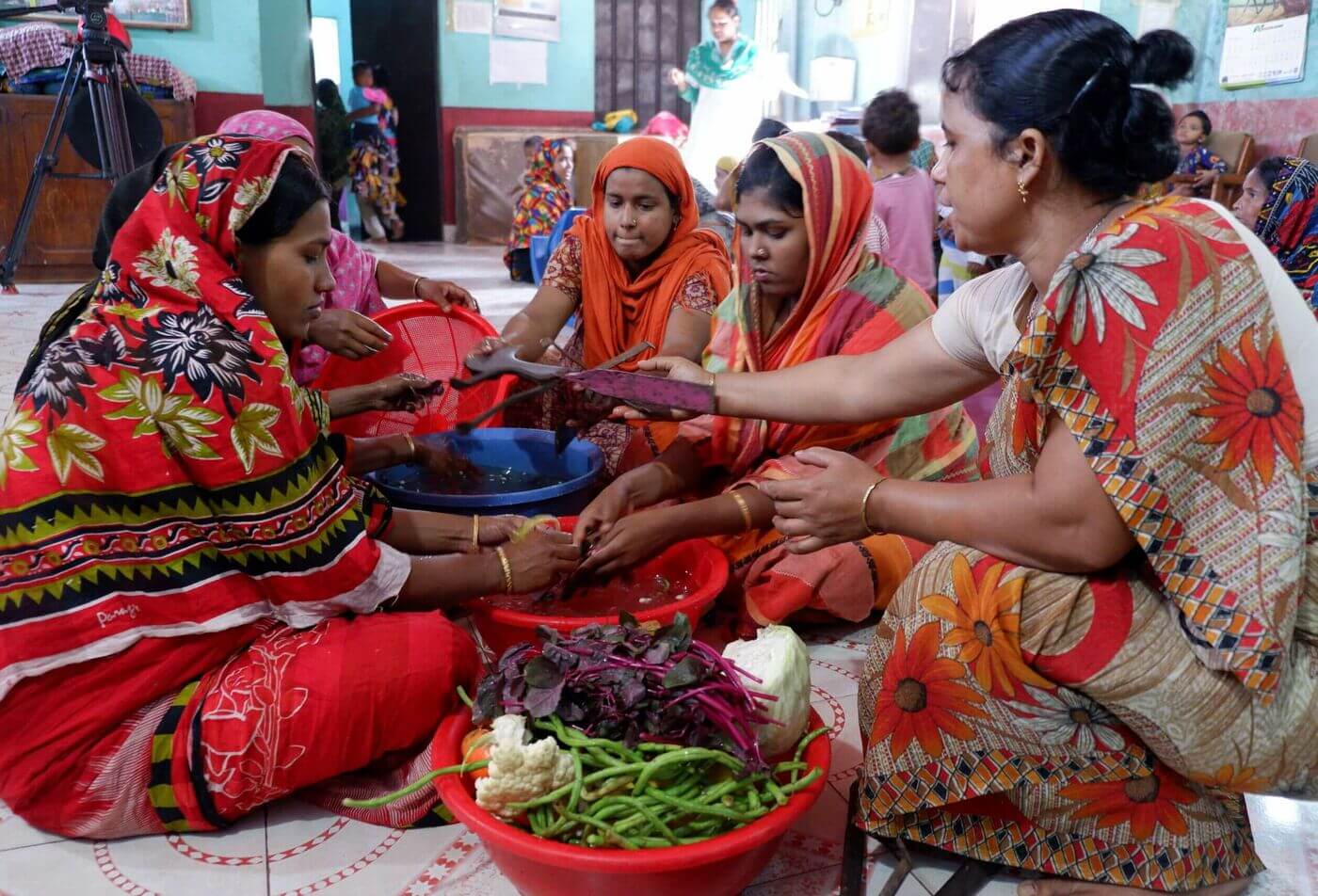 Together with our local partner organizations, we also want to increasingly take on the role of a lawyer for our patients and enable them to make use of the available (state) healthcare services.

Aside from the personal commitment of our volunteers, the application of electronic health tools and telemedicine should also improve the care of our patients, as has already occurred during the COVID-19 pandemic, when projects have been overseen by doctors in Germany.

The German Doctors does not consider itself to be a catastrophe-aid organization which is active in acute crisis situations.   We rather attempt to counteract the scandal of the permanent catastrophic shortage of medical services for billions of people. We also support people in acute emergency situations through appropriate networks in countries in which we are active.  It is conceivable that we offer our medical competence in cooperation with other organizations in individual cases outside of our operational areas during (natural) catastrophes. This has already occurred, e.g., in civilian see-rescue services in the Mediterranean.

We believe in the right of every human being to get medical care no matter their origin. Therefore our volunteer German Doctors offer medical treatments in developing countries for the poorest of the poor. Whether people infected with HIV, undernourished children deficiency syndromes or people with chronic diseases, we help everyone who needs help.

Our doctors work during their annual leave or retirement for a period of six weeks and waive any compensation. More than 7000 missions with more than 3200 doctors were completed since 1983.